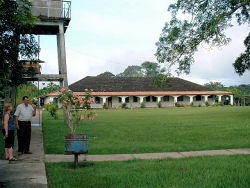 Itaituba reminds one of a frontier town, which in some respects it is. Eighty years ago, it was the centre of mining and rubber production, both of which disappeared and with them any measure of prosperity. Horse carts loaded with fruit, hides, and other produce line the dock on the Tabajos River. Streets are dusty. Most buildings look in need of repair. Shanties ring the town. An empty state-of-the-art fruit packing plant on the edge of town speaks of a once grand, but ill-conceived plan to introduce industry.

Although this area has a small overall population, it has the largest proportion of young people in Brazil. The government has mandated the civic authorities to “do something” about growing youth restlessness and unemployment.” As the mayor indicated to us in March 2004, A Mao Cooperadora has shown the most effective approach to nurturing and training people and that is why he encourages their work. That is also why we are pleased to partner with them in this initiative.

In March 2004, a group of Sahakarini supporters spent a week in Itaituba. The town was poorer than we had imagined, but the work of our partner, A Mao Cooperadora, was far more extensive and successful than we had realized.

The visit gave us a strong sense of how the School fits into an over all development program which began some twenty five years ago and now touches all parts of the life cycle of the local inhabitants beginning with a creche for infants and children, a grade school built as part of this initiative, the trade school and farm to train young people, a clinic, a dental office, and a hospital.

Unlike the states of southern Brazil, this area is underdeveloped and the people suffer from very low levels of income, services and opportunities. There were no good training opportunities offered in the Itaituba region previous to this school. It is giving the young people the chance to participate in and take advantage of growing development. Each year graduates in electrical, automotive, and carpentry trades, computer use, and agriculture will improve the standards of the existing community and also serve to help attract new development. This is a long range benefit with multiplier benefits to the area for years to come.

In the first year, a very good school building was built which houses grades 1-8 as well as some of the trades.

The A Mao Cooperadora school is considered the best in Itaituba and has a waiting list. Parents appreciate the high standards, the facility, and most of all, the caring attitude of the teachers.

The seed money which made it possible for us to dream about doing this project, came from the estate of a young man who was killed in an accident. As some of the staff spoke about how much they had hoped for such a school, they also acknowledged that it had come about because of someone else’s great loss. From great pain has come hope and happiness, gratitude and grace.